The North West Rail Link is Australia’s biggest public transport infrastructure project. Four tunnel boring machines (TBM’s) are digging 15 kilometres of twin tunnels which will be the longest rail tunnels in the nation. The route includes eight new railway stations which will link the north west of Sydney to the north shore.

Excel Hydraulics was called on to resolve a lengthy period of major issues with the TBM’s pumps and valves continually being clogged by contaminants.

Mechanical Foreman Michael Bourke explained the problems caused by the foreign matter: (1) blocked orifices in the hydraulic system (2) auxiliary thrust pump not able to properly ramp up which then led to (3) issues with the feeder unloader pump including a constantly sticking priority valve (4) blocked 0.8mm orifice in the compensator valve (5) clogged main thrust pump (6) complete failure of the loaders (7) blocked feeder unloader compensator (8) sticking proportional valve leading to (9) and the main relief valve blowing off to the hydraulic fluid tank.

The TBM operators had attempted numerous times to remove the foreign containment. The hydraulic reservoir was emptied and cleaned out. The filters on the hydraulic lines were changed. Powerful magnets were placed along sections of steel pipework in an attempt to capture the particles. Despite these attempts the contamination and blockages continued.

FPES (Excel Hydraulics) was engaged to come up with urgent and innovative ways to keep the TBM operational. As the source of containment was as yet unknown, but the effect was obvious, Excel Hydraulics designed, manufactured and supplied various filters to protect the vulnerable components.

Innovative sandwich block filters were designed, manufactured and fitted under the Parker Hannifin PVPlus compensators. These were designed to capture the containments before they had the opportunity to block the pump controlling orifices and consequently de-stroking the pumps. 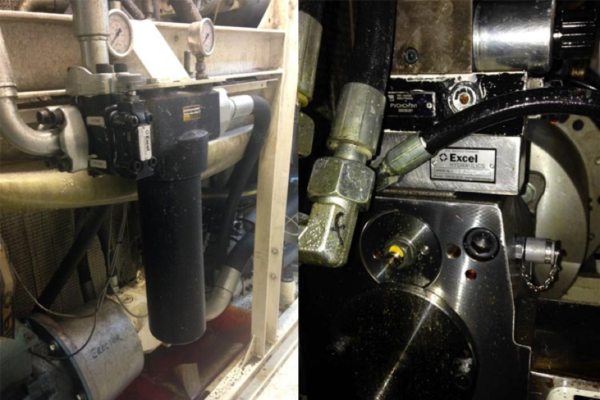 These measures proved effective in keeping the TBM operational until the source of containment could be found during scheduled downtime. As a proactive measure these innovative filters were fitted to the other North West Rail TBM’s. Click here fore more information.